The three entries – listed as top projects in the university’s Novel Research and Innovation Compe­tition – competed with those from researchers, lecturers and students from 20 countries in BIS 2013, said USM School of Chemical Engineering lecturer Prof Abdul Latif Ahmad.

It grabbed the gold medal and the Diamond award for its cost-effective solution for wastewater treatment.

“My research is about using sap from oil palm trunks as a new source of alternative natural sweetener,” she said.

All three students are pursuing Master’s degrees at USM.

“This is a system that can enhance car security with immediate response time.

“If the driver has no authority to drive, the system will alert the car owner by sending a notification including an image to the owner’s mobile phone,” said its inventor Ng Poh Sing, 24, who is now working as a software engineer. 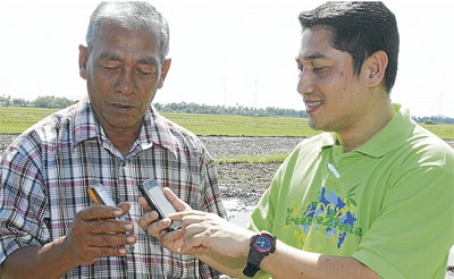 A GROUP of padi farmers in Simpang Empat Kangkong, here, are getting SMS alerts related to crop and farming activities, thanks to an innovation by Universiti Sains Malaysia (USM) students.

The "GreenEve2Peace" system, a platform linking the farmers and the Muda Agricultural Development Authority (MADA), would do away the traditional mail correspondence and public announcement between them in matters concerning farming and fertilising schedules, pest attacks or disease outbreaks.

The pilot project, which involved 20 farming units within MADA's C-IV Area Farmers Association, allowed farmers to get latest updates via SMS that can help to improve their farming and produce better crops.

"Based on our research, we found that it's crucial for padi farmers in the area to get current information disseminated through a systematic system.

"The innovative system is based on the students' final project which has won an Unlimited Potential Design for Development award at an international competition in Egypt in 2009.

"We've modified it to suit MADA's system and database," he said.

Mohd Azam said GreenEve2Peace is cheap as it would cost about RM2,000 to send 5,000 SMS updates to 200 farmers per year.

He said at the moment, 200 farmers are staying updated through the system in this pilot project.

He added that a  similar technology is being used in Japan. 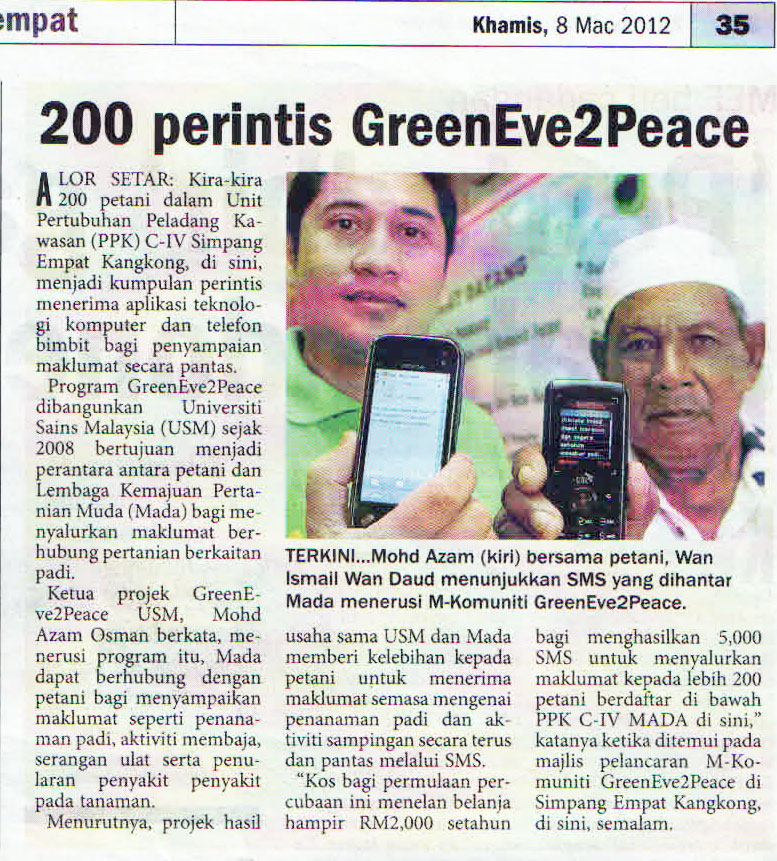 Better English now a click away for students. AN online community project initiated by Universiti Sains Malaysia (USM) has taken away the pain and hassle of learning English for 60 students. The students from five schools in Penang are now using the portal to brush up on their English in a fun and semi-formal way.