Appointed as SOCS Dean, Bahari Belaton Is Truly an Icon Of Excellence For The 'Orang Asli' Community 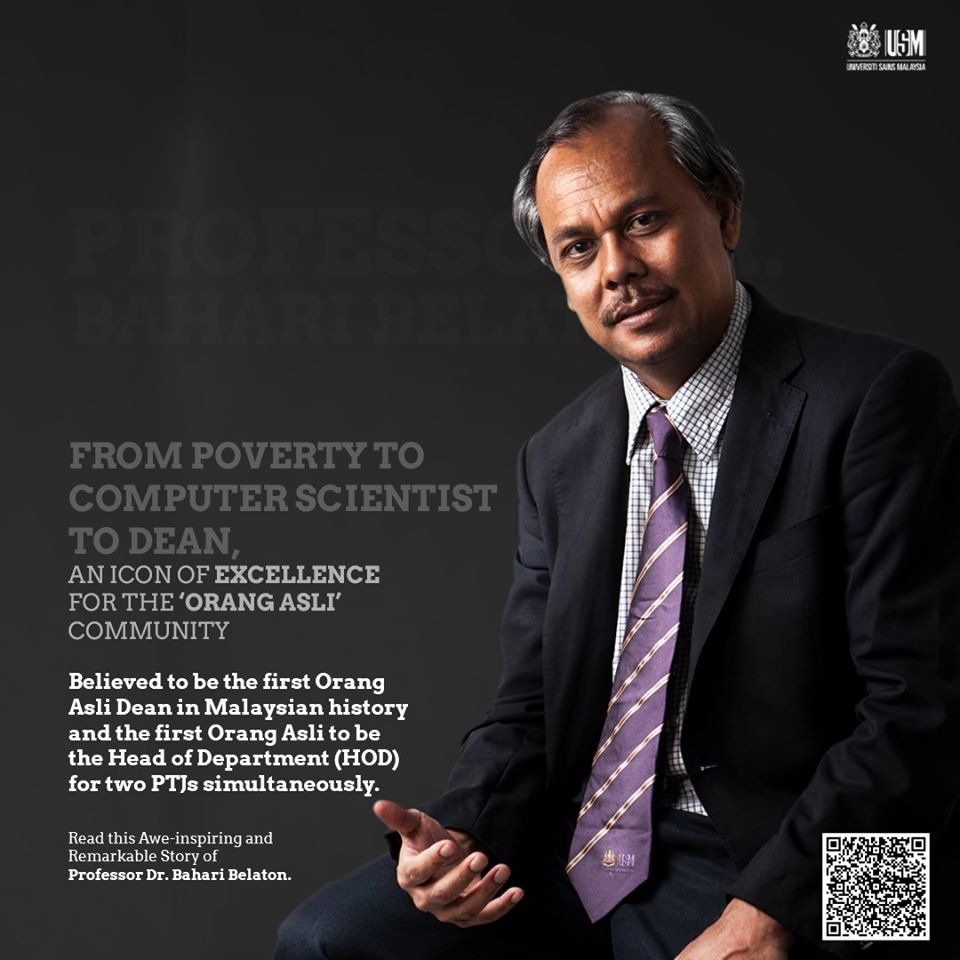 USM PENANG, 2 June 2020 – Professor Dr. Bahari Belaton is no stranger at Universiti Sains Malaysia (USM). He is well known for his admirable achievement and all the more coming from the ‘Orang Asli’ (indigenous people) minority community, it is truly a remarkable feat.

He added another feather to his cap recently when he was appointed Dean of the USM School of Computer Sciences (SOCS), effective from 2 June 2020, taking over from Professor Dr. Rosni Abdullah @ Mustafa, and also Director of the National Advanced IPv6 Centre (NAv6).

With the two appointments, it is believed that Bahari is the first Orang Asli to be appointed as a Dean in Malaysian history and also the first to hold two head of departments’ position simultaneously in an institution of higher learning in Malaysia.

Known for his expertise in areas of Scientific Data Visualisation, Computer Graphics and Network Security, he has served with USM for more than 24 years. He has achieved numerous successes throughout his career, especially with regard to academic development and research.

Bahari who belongs to the Semai ethnic subgroup from the 'Orang Asli' village of Tangkai Cermin in Perak, is highly-experienced and has travelled abroad to study, graduating with a Bachelor's degree in Computer Science from the South Australian Institute of Technology in Australia in 1989. In fulfilling a requirement made by the Malaysian Public Service Department (JPA) which specifies that those who intend to serve in the public sector need to have an Honours degree, he then pursued an additional year of study at Flinders University, Australia (1991) to obtain an Honours before completing his Doctoral studies (Ph.D) at Leeds University, U.K. (1995).

Easy as it may sound, the challenges faced and sacrifices made by this second youngest child of seven is no mean feat.

Bahari lost his father at a young age, when he was nine. His life became even harder as he had to depend on his mother who struggled to earn a living for the family.

“Around the 1960s, conditions were different than how it is now. Added to the fact that staying in an ‘Orang Asli’ village that was about 20 kilometers away from the nearest town which was Tanjung Tualang, everything was less than rosy.

“In fact, I only came to know in the later years from my late mother that all my other siblings had passed away, leaving only me and my elder sister, without knowing the exact cause(s) of their deaths.

“There was no electricity in our village, and we were fortunate enough to obtain clean water supply from tin miners, who were by chance lived close by to the village. It was water from three main pipes that was shared with the whole village.

“Such conditions, however, were not really obstacles for me in seeking knowledge,” he said, as he mentioned that his only sister that has survived until now has also managed to make a change in her life by being one of the pioneer nurses at a special hospital for 'Orang Asli' in Gombak, Selangor and has since retired.

What's interesting about Bahari was that, ever since he was little, he has been blessed with a highly inquisitive mind. This was among the starting point of his success, as he was observant of his surroundings and his mind would then start to formulate questions.

He added that, while growing up especially during his school days, his settlement by coincidence, was located next to an area housing engineers (including expatriates) who worked with a mining company, the Malaysian Mining Corporation (MMC).

“Daily, I would take the opportunity to help and tag along with the fish and vegetable seller, a Chinese man, who also drove the school bus fetching me and my friends to school.

“The reason I followed him was none other than to satisfy my curiosity to see the bungalow houses of the engineers, aside from helping him to sell fish and vegetables,” he said.

He also stressed that, much of his success was also due to the envious feelings of the success of others he had seen.

Bahari was raised by his mother single-handedly, and being illiterate, education to her was not a priority. What mattered most then was the means to earn a living and to continue with life. She did all kinds of work, from searching for forest produce to working for farmers in minding their crops, to make ends meet.

However, he was proud of his mother who was very dear to him, because despite her shortcomings, she had always supported him in his pursuit of knowledge and always tried her best to provide for his needs including school uniform, shoes, pocket money and so forth.

Thus, during his secondary school days, his observations of success stories from other communities would fuel his desire to succeed like them one day.

Bahari also admitted that, the Department of Orang Asli Affairs (JHEOA) played an important role too throughout his life journey and the lives of other 'Orang Asli' children in providing them with various aids and support.

With mathematics being his favourite subject in school, ever since then he had been deeply interested in learning new things and he would be thrilled when learning and completing an exercise. He added that, he would be able to finish and complete all the exercises and homework given by his teachers on his own.

“External factors were also helpful in giving the right motivation to individuals from minority groups as with me, where support at home was very minimal in assisting and promoting formal education.

“Recognition and support provided by teachers and the school community played a crucial role. In my case for example, the teachers entrusted me and gave me the chance to be the classroom monitor and prefect, among others.

“Honestly,  I would say that though it might seem to many as being small or of minor relevance, but for the minority groups or those in the bottom billion, such a support would mean a lot; these are the game changers for my life!,” he said as he shared some tips on his success up till now.

Not forgetting his roots, Bahari also shared some insights and advices to the minority groups such as him, with the hope of encouraging and inspiring them to also attain success.

He said, what's important is that, those out there need to persevere in what they do or hope to achieve, as the challenges faced by this group in whatever area or at whichever level would be twice as hard compared to the general society.

For the 'Orang Asli' specifically, the challenge to adapt, the dominating sense of togetherness (being different from others) and other aspects are among the 'unwritten' issues which need to be dealt with "simultaneously" along with other challenges faced by the general society.

“The 'Orang Asli' community also need to live with tolerance and to be humble, while embracing the need to befriend as many as possible those from the general society.

Other additional advices would be those commonly shared in order to achieve success, such as to work hard, to be diligent in doing work and to give nothing but the best,” he said further.

He began his career at USM in November 1995, and has referred to the former Dean of the School, Professor Dr. Zaharin Yussof as his 'mentor' and a highly-respected icon.

He also considered Zaharin as a unique individual, "always sharp" in his thinking and actions and more importantly, cares for those 'under' him well.

“I wish I could emulate these excellent leadership qualities,” that was his hope in aspiring to be a highly respected leader.

He further said that, if I were to assess and reflect upon myself now, I would say that what I had 'envied' of during my schooldays I have now achieved, and that is to become an individual who has excelled in his own field.

“My aim in life is to serve, provide my expertise and contribute my capabilities to USM, my students, my community and my family,” he said.

In quoting the words of the current USM Vice-Chancellor, Bahari is truly grateful for being able to 'escape' from the restrictions of the B40 group and would now provide his best to assist those in the B40 group to leave or escape from the same lifecycle.